Pompey in the Community (PitC) have been awarded nearly £1 million towards the cost of building the John Jenkins Stadium.

Chancellor Rishi Sunak announced in the Budget that a total of £986,000 would be earmarked for the project from the government’s Community Ownership Fund.  The £150 million fund will support a range of community ownership proposals nationwide including: sporting and leisure facilities, cinemas and theatres, music venues, museums, galleries, parks, pubs, post office buildings and shops. This is an opportunity for groups to take over these local amenities and to run them as businesses by the community for the community.  The bid was submitted during the summer of 2021 to stop the local community in Portsmouth losing the sports facility at Moneyfields.

The John Jenkins Stadium – named after the D-Day veteran and lifelong Blues fan – will be built on the current site of Moneyfields FC in Baffins.  It will consist of two full-size 3G pitches, a five-a-side pitch, a health and fitness gym, boxing facilities, clubhouse, community café and much, much more.

Clare Martin, CEO of PitC, said: ‘I am absolutely delighted with this news. We have been working tirelessly over the past few years to raise the funds – which has certainly been a challenge in the recent climate.  PitC currently spends more than £120,000 hiring pitches for the programmes we run for 36,000 children and adults throughout the local community every year, often having to bus our teams out of the city to places as far away as Alton in order to find a pitch. 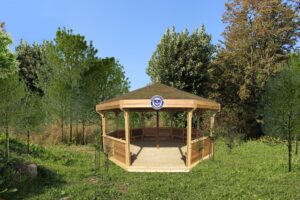 This new development means that for the first time, we will have our own pitches, a home and a facility the city deserves.’

The surrounding grounds will be developed and landscaped to include raised beds for food growing projects, fruit trees and an EcoHub classroom, where PitC will run environmental and education projects.  Clare continued, ‘This new development means that for the first time, we will have our own pitches, a home and a facility the city deserves.’

The John Jenkins Stadium will provide a base for PitC, where they will run projects and programmes for thousands of school children, disability sports groups and members of the public every week of the year.

The sports facility will also be home to Moneyfields FC and Portsmouth FC Women.